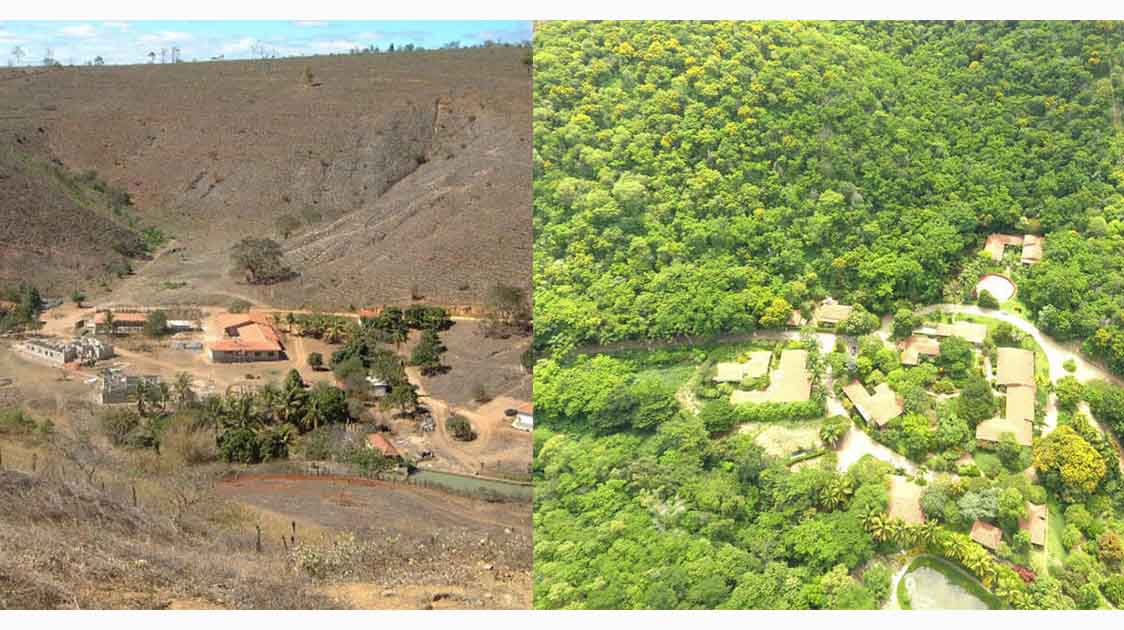 You may sometimes wonder like us, can nature truly return by itself? The answer is, thankfully, YES!

Witnessing Mother Nature bring a forest back to life is a natural miracle. Even after a forest has been razed and cleared, it can return. However this natural process can take decades or even hundreds of years, and unfortunately we don´t have unlimited time ahead of us to let the planet heal itself alone.

Humans can sometimes help speed up this process. In corners of the world, a variety of projects are helping forests reclaim their old territories through ingenuity, tech and patience.

Here are some inspiring examples we have come across that bring hope for the future!

It´s hard to describe the outstanding impact this one man has had on the planet in a few lines, but we will try! World-renowned photographer Sebastião Salgado has been honored for environmental work in Brazil, where he brought the lost forest back to life from his childhood.

In 2000, it was nothing but a patch of brown dirt. Six years later, the hills were predominantly green (as you can see in the main photo of this post), and by 2012 there was already a lush blanket of Atlantic rainforest.

For Salgado, now 76, the farm represents the biggest project of his long and impressive career. He says his love of nature stems from a traumatic experience he had after completing a long and difficult photo project on migrants and refugees in 1999. “I had lost faith in our species,” he told Canada’s The Globe and Mail newspaper in 2015, which led him to take a break from photography.

At the time, Salgado and his wife — who were living abroad — inherited the farm in Brazil from his parents. He was shocked when he discovered that nothing remained of the magical forests he had played in as a child. Intensive livestock farming, deforestation, drought and erosion had turned the family home into a lunar landscape.

“When we inherited this piece of land it was as wounded, as dead, as I was,” he says. “Once it had been an ecological oasis. When I was a child, half the farm was forest — I grew up in paradise. But when we arrived less than half a percent of the land was wooded.”

One day, Salgado says, his wife suggested that they “rebuild paradise,” just like it used to be. With the help of wealthy friends and sponsors, the Salgados began to do just that. Salgado says locals were perplexed at the time, because it was common practice to clear-cut forests to make space for grazing animals or crops. “It went against everything they had been taught to think,” says Salgado. “Today, with all of the droughts and climate change, farmers are suffering, especially from lack of water. Now they are finally beginning to get it.”

Instituto Terra now delivers most of its saplings to regional farmers looking to replant forests, in part to help restore lost sources of water. The institute also teaches young people about sustainable forestry, so they can help to replenish the wooded areas at their own family farms.

To find out more about this incredible man and his family, check out the documentary-film made about his life, The Salt Of The Earth. It is as much uplifting as it is profound. 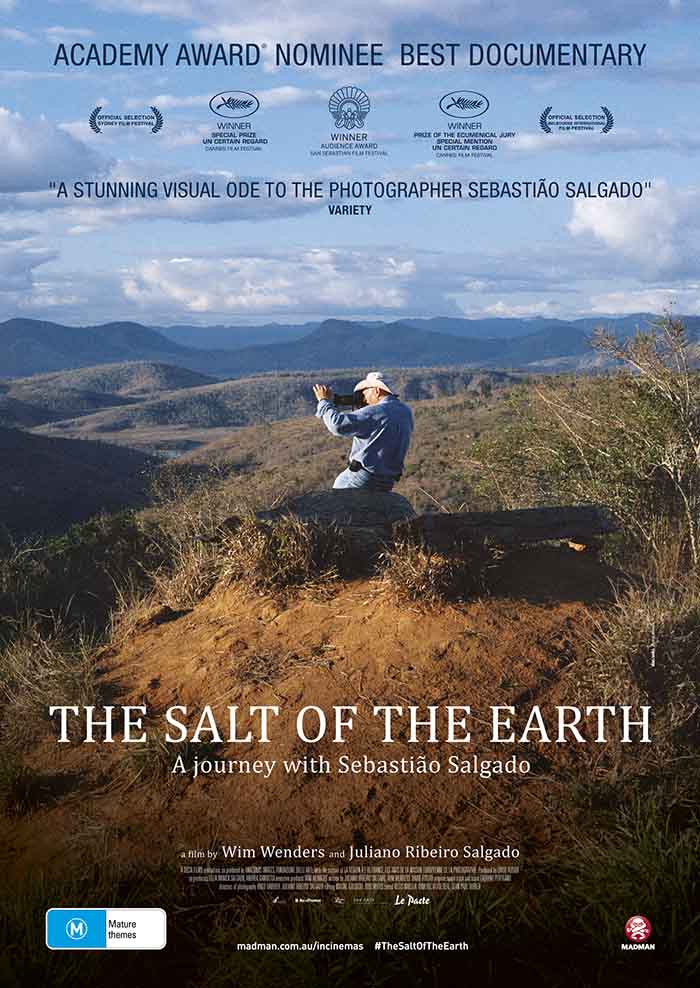 The inspiring documentary-film about the life and works of Sebastião Salgado.

Half a millennia ago, forests covered much of the Iberian peninsula in Europe. But that soon changed. Centuries of wars and invasions, agricultural expansion and woodcutting for charcoal and shipping wiped out most of the woods and transformed places like Matamorisca, a small village in northern Spain, into degraded landscapes.

The region’s arid climate and depleted soils would be a recipe for disaster in your average reforestation program, but for the Amsterdam-based Land Life Company it’s an ideal place. “We typically operate where nature does not come back by itself,” says Jurrian Ruys, its CEO. “We go where there are rougher conditions in terms of weather, with rough or very hot summers.”

In Matamorisca in Spain, they intervened in 17 barren hectares owned by the regional government and peppered them with their signature device: a biodegradable cardboard donut they call the cocoon which can hold 25 litres of water underground to aid a seedling’s first year.

Around 16,000 oaks, ashes, walnuts, rowans, and whitebeams were planted in May 2018, and the company reports that 96% of them survived that year’s scorching summer without extra irrigation, a critical milestone for a young tree.

As its focus is on restoring an ecosystem, it works with organisations that don’t expect their money back. Thankfully, his company belongs to a global movement of organisations trying to save degraded or deforested areas, ranging from exuberant tropical lowlands to arid hills in temperate regions. Spurred by global biodiversity loss and climate change, these groups are pushing the boundary of how to revive forest cover.

With around 600 hectares replanted around the world since 2015 and another 1,100 planned for this year, the company’s drive fits into a much bigger movement called the Bonn Challenge, a global effort to restore 150 million hectares of the world’s deforested and degraded land by 2020. As the year comes to a close, they have 210.12 million hectares pledged! That’s an area roughly the size of Iran or Mongolia.

These targets include both the rehabilitation of forested areas that have lost density or look a bit weak (a process known as ‘restoration’ in forestry lingo) and the recuperation of forest cover in areas where it was completely cleared (what’s known as ‘reforestation’). That global target is broken into smaller pieces and takes shape in the collaboration of a series of partners around the world, Land Life Company being one of them. By 2030, the goal is to reach 350 million hectares – 20% more land than the whole of India!

Sadly the project was forced to close in only its second year and was abandoned. Everyone had almost forgotten about it.

However, when researches revisited the site nearly two decades later, the desolate site had transformed into a thriving, lush forest! The peel already deposited on the 3-hectare (7-acre) site led to a 176 percent increase in above-ground biomass. It would seem that the deluge of nutrient-rich organic waste had an almost instantaneous effect on the fertility of the land. The landscape has been unrecognisably transformed into a dense, vine-filled jungle:

How the conversation project brought this forest back to life in less than two decades!

When comparing the site to a nearby control area that hadn’t been treated with orange peels, the research team found their experimental compost heap yielded richer soil, more tree biomass, and a broader diversity of tree species – including a fig tree so huge it would take three people wrapping their arms around the trunk to cover the circumference!

While the exact mechanisms of how some orange peel were able to regenerate the site so effectively in just 16 years of isolation remain something of a mystery for now, the researchers hope that the remarkable success of this abandoned orange peel dump will inspire other similar conservation projects. At Bios, we certainly hope so too!

Check out this video which shows the forest as it was before and after the experimental conservation project!

What do you think of these examples of humans can bring a forest back to life? Maybe you know of some other projects or people doing similar things? We would love to hear from you in the Comments section below!

Here are some other posts you may enjoy reading!

The Queen Of Trees: Wangari Maathai Risked Her Own Life For Reforestation