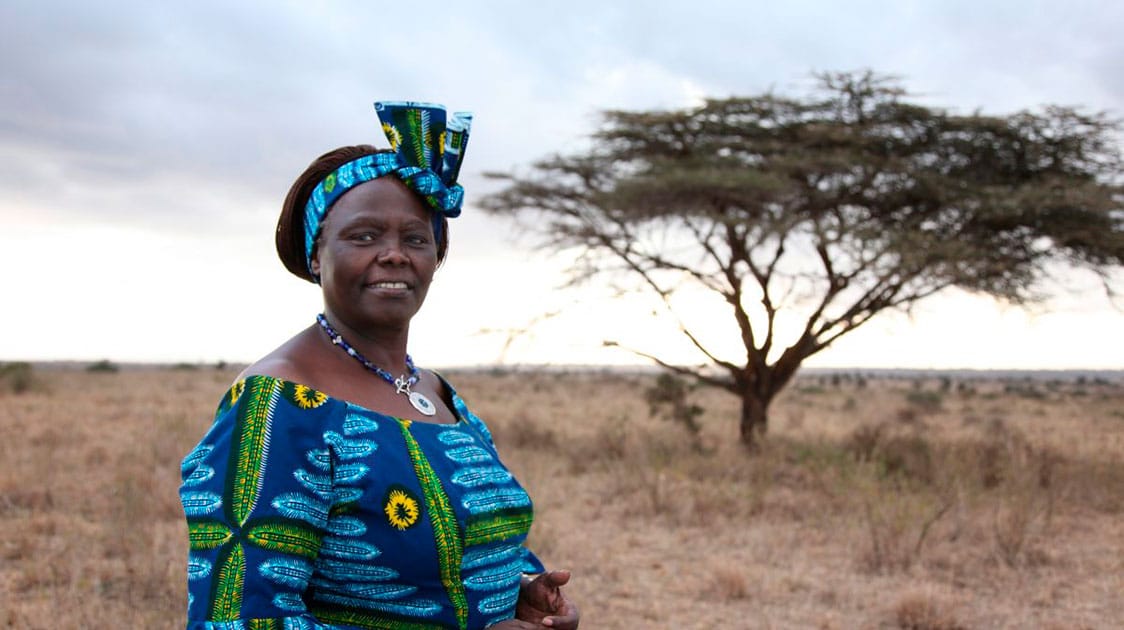 Wangari Maathai was a woman who, through her own sheer strength, beliefs and determination, created a ground-breaking environmental movement called The Green Belt which has since planted millions of trees.

She did not tread an easy path to get there. She risked her own life, having been beat and arrested more than once by Kenyan authorities, but even that did not stop her.

She was later awarded the Nobel Peace Prize for her environmental efforts.

This story is about one single woman who gave way to a whole movement. May her story serve as an inspiration to all.

The early life of Wangari Maathai

Wangari Maathai has always had an affinity for trees. As a child, she learned from her grandmother that a large fig tree near her family home in central Kenya was sacred and not to be disturbed. She gathered water for her mother at springs protected by the roots of trees.

Maathai, the first African woman and first environmentalist to be honored with the Nobel peace prize, has always hewn to a singular path. The third child of a sharecropper father and subsistence farmer mother, she began attending school at age seven. Although it was unusual for rural girls in British-ruled Kenya to study, her parents agreed.

She excelled and found herself drawn to the sciences. After graduating near the top of her class from a convent high school, she was awarded a U.S. government scholarship designed to enable young Kenyans to be post-independence leaders. She went on to study in Kansas and Pennsylvania, earning bachelor’s and master’s degrees.

In 1963, she watched Kenya gain independence on television, and she returned home in 1966. Then in her early 20s, she joined the University of Nairobi as a researcher and then lecturer in veterinary anatomy. What followed was a series of firsts. In 1971, she became the first woman in east and central Africa to earn a Ph.D.; her doctorate is in biological sciences. A few years later she was appointed the university’s first woman department chair.

Where her love of trees began

It was in the mid-1970s that Wagari Maathai became aware of Kenya’s ecological decline: watersheds drying up, streams disappearing, and the desert expanding south from the Sahara. On visits to Nyeri she found streams she had known as a child gone—dried up. Vast forests had been cleared for farms or plantations of fast-growing exotic trees that drained the ecosystem of water and degraded the soil.

She began making connections others hadn’t. She listened to the women talk about water, about energy, about nutrition, realizing it all boiled down to the environment. She quickly came to understand the linkage between environmental degradation and the felt needs of the communities.

She hit on the idea of using trees to replenish the soil, provide fuel wood, protect watersheds and promote better nutrition through growing fruit trees. 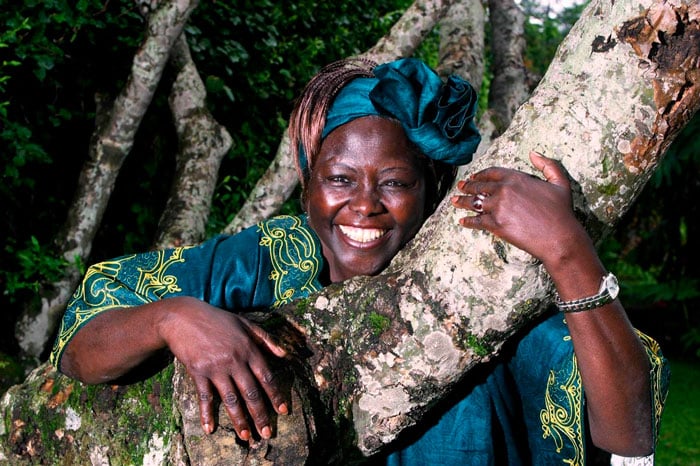 Maathai set up a tree nursery in Karura Forest on the outskirts of Nairobi, later shifting it to her backyard. But the idea did not catch fire.

Disappointed, but not deterred, the National Council of Women of Kenya urged her to pursue the idea and in 1977, the Green Belt Movement was born. Planting trees seemed doable to her. But government foresters initially resisted. They didn’t believe uneducated rural women could plant and tend trees.

Wagari Maathai and the Green Belt Movement led high-profile campaigns to save Kenya’s forests and green spaces. In 1991, for instance, the movement saved Nairobi’s Uhuru Park from an enormous high-rise to be built by the ruling party. The dictatorship was still strong, and not amused. For their boldness, Maathai and Green Belt colleagues were subjected to stints in jail and harassment, including death threats. Many nights, she stayed in safe houses. She was ridiculed publicly by parliament and then-President Daniel Arap Moi, who called her a mad woman and a “divorcée.” At protests, government security forces and hired thugs regularly inflicted beatings—once to within a panga (club) blow of Maathai’s life. 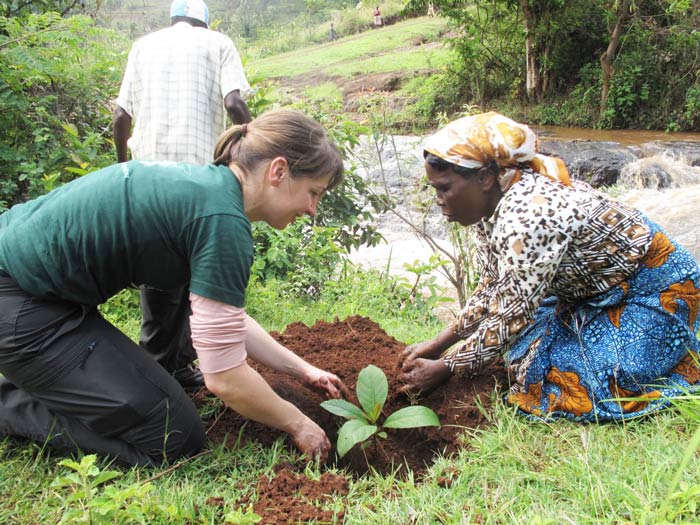 And yet, she was not put off. They passionately carried on their fight for reforestation.

In 1992, partly as a result of Wagari Maathai’s activism, Kenya legalized opposition political parties. In subsequent years, the regime, while still corrupt and cantankerous, showed signs of cracking. After a series of violent confrontations with Maathai and the Green Belt Movement over Karura Forest in 1999, the regime abandoned its illegal development plans. The forest stands today, vast and green, on the edge of Nairobi’s throbbing streets.

She spent International Women’s Day in 2001 in jail. But she has had the last laugh. She was elected to Parliament in 2002, then appointed deputy minister of environment and natural resources. The day Wagari Maathai and other members of the new government were inaugurated, she recognized her police escorts. They had once been her jailors.

Her non-governmental Green Belt Movement has since planted 30 million trees across Kenya, many of which still stand.

In her beautiful own words “We cannot tire or give up. We owe it to the present and future generations of all species to rise up and walk!”.

Her legacy lives on

Professor Maathai would have been 80 years old today. She died on 25th September 2011 at the age of 71 after a battle with ovarian cancer.

Although she proved herself a star, with substance, at the Nobel peace prize festivities hosted by Oprah Winfrey and Tom Cruise, there is little likelihood of her becoming ungrounded. Maathai joked: “Because I am used to the grassroots, digging holes and planting trees, it has not been very easy to be at the top!”

Professor Maathai was internationally acknowledged in other ways for her struggle for democracy, human rights, and environmental conservation, and served on the board of many organisations. She addressed the UN on a number of occasions. She served on the Commission for Global Governance and the Commission on the Future.

She authored four books: The Green Belt Movement; Unbowed: A Memoir; The Challenge for Africa; and Replenishing the Earth. As well as having been featured in a number of books, she and the Green Belt Movement were the subject of a documentary film, Taking Root: the Vision of Wangari Maathai (Marlboro Productions, 2008).

Her daughter, Wanjira, one of her three children, currently works with the Green Belt Movement. Listen to her speak in this wonderful podcast interview as part of the BBC´s 100 Woman series: When Wangari Maathai Won the Nobel Peace Prize.

In her Nobel Prize acceptance speech in December, she said the purpose of the program was to help people “make the connections between their own personal actions and the problems they witness in their environment and society.” Had you heard of Wangari Maathai’s and her story? We would love to hear from you in the Comments section below!