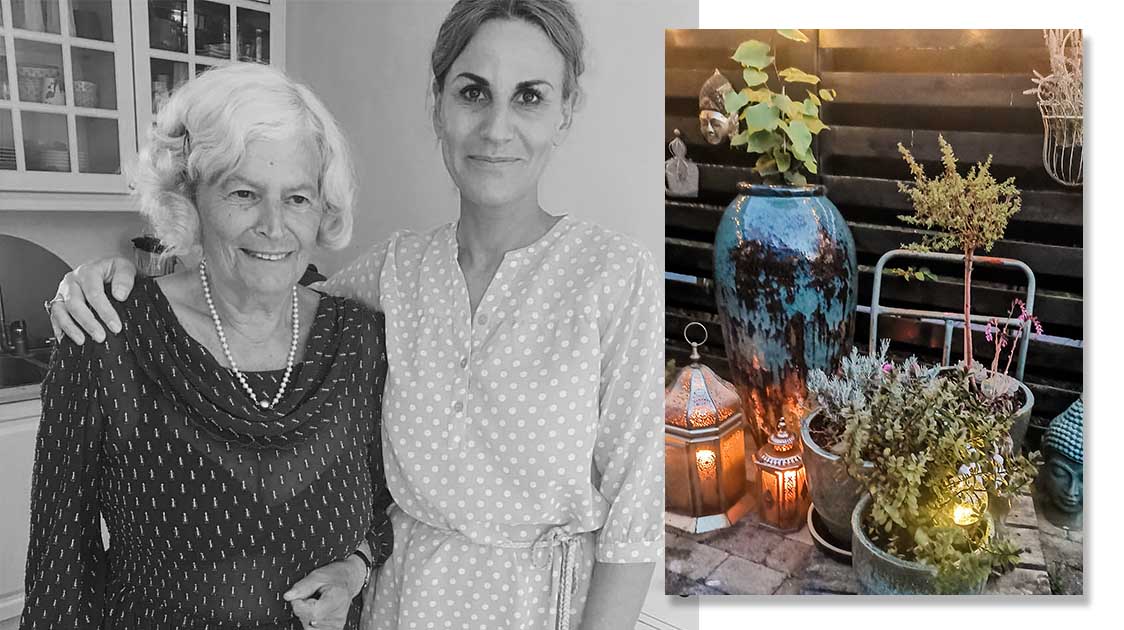 To introduce myself in a few words, my name is Malene, I live in Copenhagen in Denmark with my daughter Sophie. My son Nicklas just moved out. I am self employed and in my spare time I love writing books, painting abstract paintings, barre training and walks in nature.

Nature plays a BIG role in my life. I live and breathe in nature. As soon as the spring comes, you will find me in my garden, where I enjoy the sun, my flowers and trees, fresh air, the calmness and sounds of birds.

My mother did not die a natural death caused by age, nor by sickness or an accident, that itself would be tragic. My mother was killed… by a serial killer. It could not be any more tragic and pointless. I dit not get the time to say goodbye to my mother, hold her hand in her last minutes and say my last goodbye, so for me it was the most important thing, to create a contrast to that horrific ending of hers.

I dit not have much knowledge of what my mother wanted for her end of life ceremony. Only thing that I knew was that she wanted to be cremated and have her ashes scattered at sea. I did not get the time to ask her if she would like to become a tree in the after-life, but I know her so well, that she would have loved the idea.

I´ll always remember seeing the Bios Urn ® for the first time and thinking: “What a beautiful idea, I want that when I pass away”.

I decided to spread half of her ashes over the sea, and plant the other half as a Judas tree in a big garden planter in my yard. That way, if I move, I can take the planter with me.

The Judas tree is also known as a Madonna tree or love tree, caused by the leaves looking like hearts and turn from green to golden yellow/reddish in spring. In that way we still have her with us, close to us.

We talk to her and honor her by lighting candles in lanterns at her birthday, at Christmas and when ever we feel for it. She grows further in life as a tree, together with us. That is the most beautiful and meaningful thing I have ever done.

Natural burial options are legal under some circumstances

Scattering human ashes as one wishes is only allowed under certain restrictions – dispersal of ashes is permitted in the sea for example – the same regarding planting a biodegradable urn in a public space such as a forest or park, BUT natural burials with a Bios Urn may take place on private property (as long as you have the permission through the local Church).

There are some conditions the natural burial on private land must comply with such as the size of the plot must be over 5000 square meters or the place where the urn is lowered must not be marked. Thus, there must not be a stone or memorial that makes at the site of appearance of cemetery.

A declaration is then registered on the property, which makes the owner at all times obliged to refrain from digging so deep on the site that the urn can be touched. The obligation is valid for 10 years.

As far as green cemeteries or natural burial grounds are concerned, there are currently only few in Denmark, no more than 10 at the most. Since 2008, it has been possible to be buried in nature in Denmark. Although it has been legally allowed since 2008, it was not until 2014 that the first municipal forest cemetery was opened. In January 2018, the first private forest, Stensballegaard Skov near Horsens, was inaugurated as a forest burial site.

How death is traditionally approached here in Denmark

In the event of the death of a family member, friend or relative in Denmark the first thing to do is to contact the local doctor of the deceased. The doctor certifies the death and issues a medical certificate of death, and reports the death to the local authorities. All deaths in Denmark are registered by the Danish National Church and must be reported to the local church office in the area of residence/parish of the deceased within 48 hours. This report, which is also a burial request, has to be carried out even if the deceased was affiliated with another religion, or not a member of the church.

The Church Office then notifies the National Register of the death. This is the moment when the family is summoned to deal with the distribution of the deceased’s assets.

In general, the burial or cremation takes place within 8 days of the death. Tradicional burial (or inhumation) of the dead body is a ceremony that is in decline in Denmark. As people move away from their hometown and thus also away from relatives and family graves, there are fewer and fewer people who want an actual funeral. Perhaps this is due to the thought that the relatives should not go and look after a burial site. Perhaps economics also has an impact, as a coffin burial will always be more expensive than an urn.

As for Danish people’s beliefs around death and afterlife, it depends on their religious beliefs. The most common religions in Denmark are Lutheran Christianity (60% of the population), followed byAtheism (13.2%) and Agnosticism (12.5%).  Many Danish people believe in several superstitions surrounding death. When someone is going to die, they open the window for their soul to leave. Doing this helps people grieve by bringing nature into their home and hoping for better days ahead. They also may place candles on the windowsill to honor and remember the deceased. This tradition is common in several other Scandinavian countries, as well.

A Danish funeral is typically eight days after the death, usually in funeral home or church if the deceased was religious and typically has the casket present.

My mother´s memorial was a very hard, but beautiful day

For my mother´s memorial, we chose a chapel instead of the church.

I sing in Copenhagen Gospel Choir, so our choir sang an uplifted happy song to begin with. My mom had never heard me singing in the choir, she did sadly not live to see that before her life was taken away from her, so I took the choir to her. My daughter also sang a song and I gave a speech for my mother, where I talked about memories, what kind of person she was, gave anecdotes that makes people both laugh and reflections over life and the way we live in it.

After that we had a lighting ceremony, where we, one by one, went up to the coffin, lighting a tea light and placed it on the coffin along the choir sang a song about lighting lights for others, you and me, and last we all placed a personal flower on my mothers coffin and sending her our thoughts and love.

I invited all the funeral guests to my friends restaurant, where had a nice time with light food and drinks. It was a very hard but beautiful day.

The natural burial in the planter in my home took place shortly after. 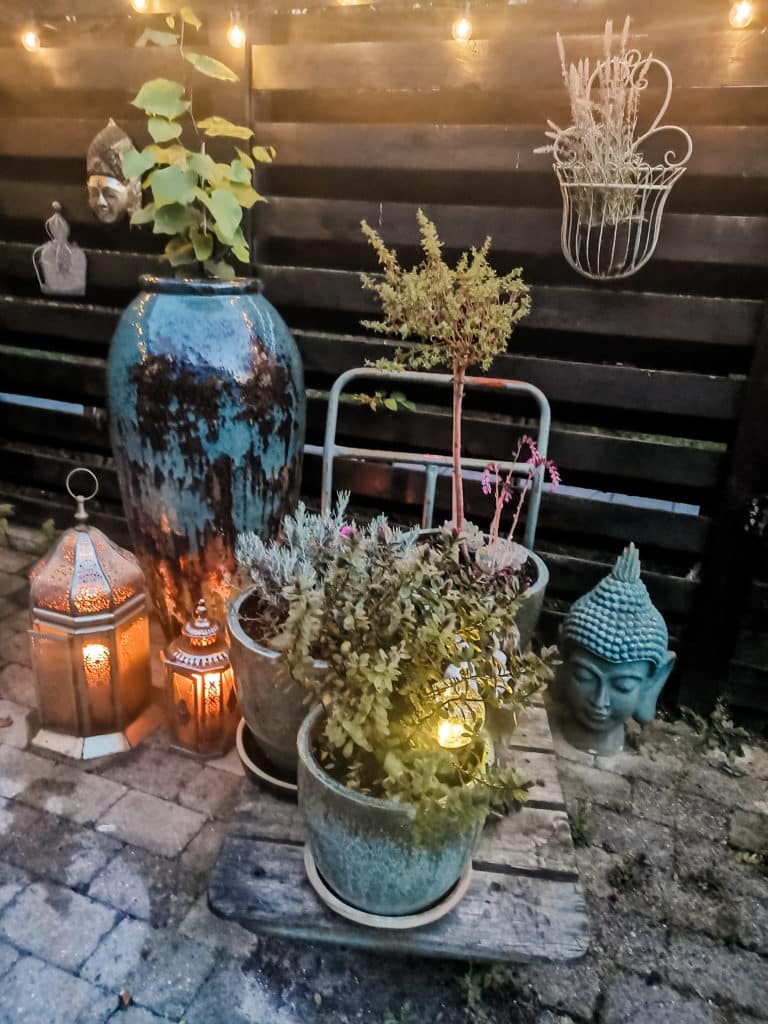 My dream for the future of funeral industry

After my own personal experiences and discovering the Bios Urn ®, I decided that I wanted to offer it to more people. So I went on to become a Bios Urn ® distribuidor in Denmark.

Studies have shown that every fourth Dane does not want a church funeral, and many want the forest as a last resting place. So I believe that a tree urn and the possibility to be planted on private land is the natural next step. In 2019, permission was granted for 60 urn reductions on private land (Source: Ministry of Church Affairs). The number has grown steadily in recent years. I am going to work for that number to keep on growing. I hope that there are possibilities to accommodate any wishes that one can have, as long as it does not offend anyone, and by that I mean that there should be more freedom of choice and more natural burial options.

We often hear the term “normal” funeral – but what is a normal for each individual? The options are so varied, although I personally believe that it should be coherent with nature as much as possible.

I strongly believe that people should have more rights as to what they can do on their own private property. One thing I will fight for is to make it easier to plant on private land and especially in a planter as I did with my mother. People should have more power to decide what to do with their remains or the remains of a loved-one, as long as they don´t disturb or violates others. The Bios Urn is 100% biodegradable and leaves absolutely no trace, so for me it is very hard to see what the arguments are for making it easier? We are not talking about putting a skeleton in the ground, but a biodegradable urn in the ground or a planter with a beautiful tree.

In the planter I have chosen, I can take my mother with me if I move to the other end of the country or another continent and I don´t have to have feel guilty that I don´t visit the grave of my mother, because her afterlife as a tree is with me, and will keep the memories alive every day I look at the tree.

What is also great about the tree urn is that it is possible to split cremains between loved-ones, especially in the case of more delicate personal situations such as divorced or separated parents to a deceased child, so that all parties can plant the tree they love and both keep their loved-ones close to them throughout their lives… as a beautiful memorial tree. Life after life, I simply love it.

And as for my own dreams…

My journey has led me to spend a lot of time thinking about my own personal end-of-life plans. I have no doubt in my mind that I would like to have a natural burial and have a beautiful tree be planted in my physical remains.

In fact, I would like to become a white and light pink magnolia tree. I have always loved those trees! Fossils have been discovered and this proves that magnolia trees have been around for at least 100 million of years, thus, magnolias are considered as one of the first flowering plants that had ever evolved on earth. They flower for a long time, and have a nice meaning. That feels right for me. 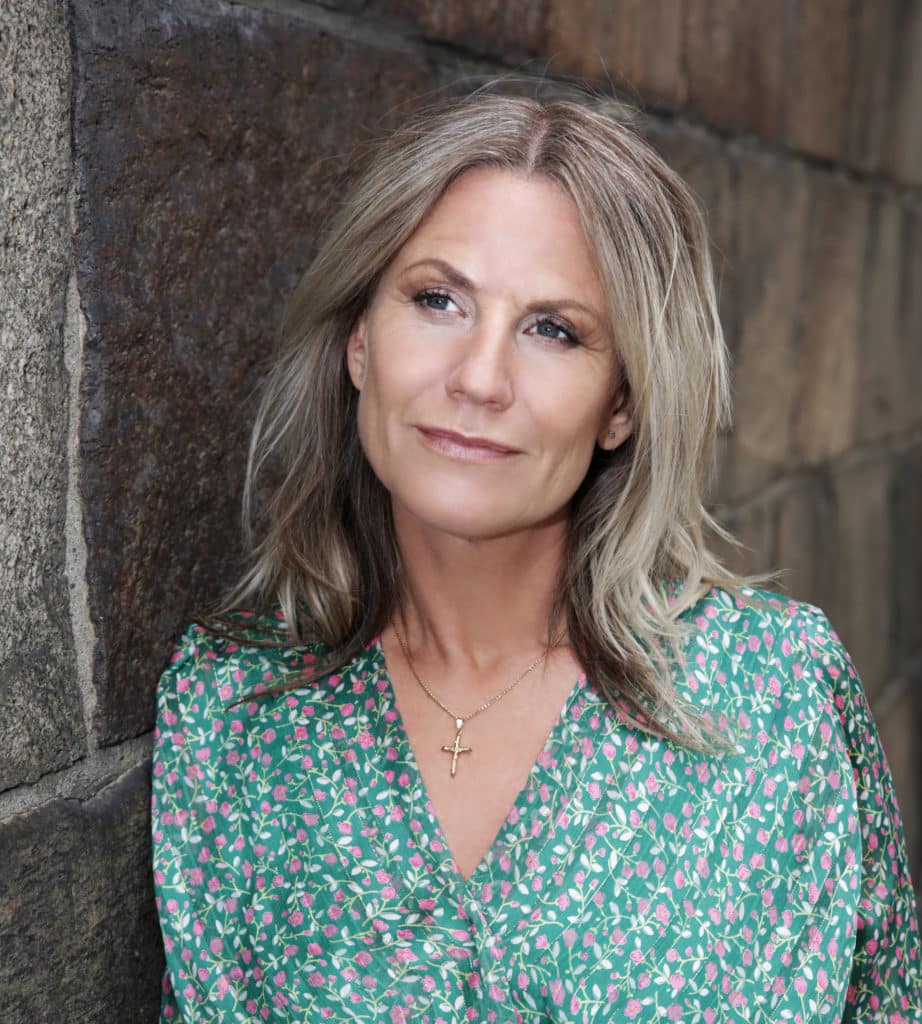 What do you think of Malene´s story? We would love to hear from you in the Comments section below!

We thank Malene for taking the time to share her story with us.