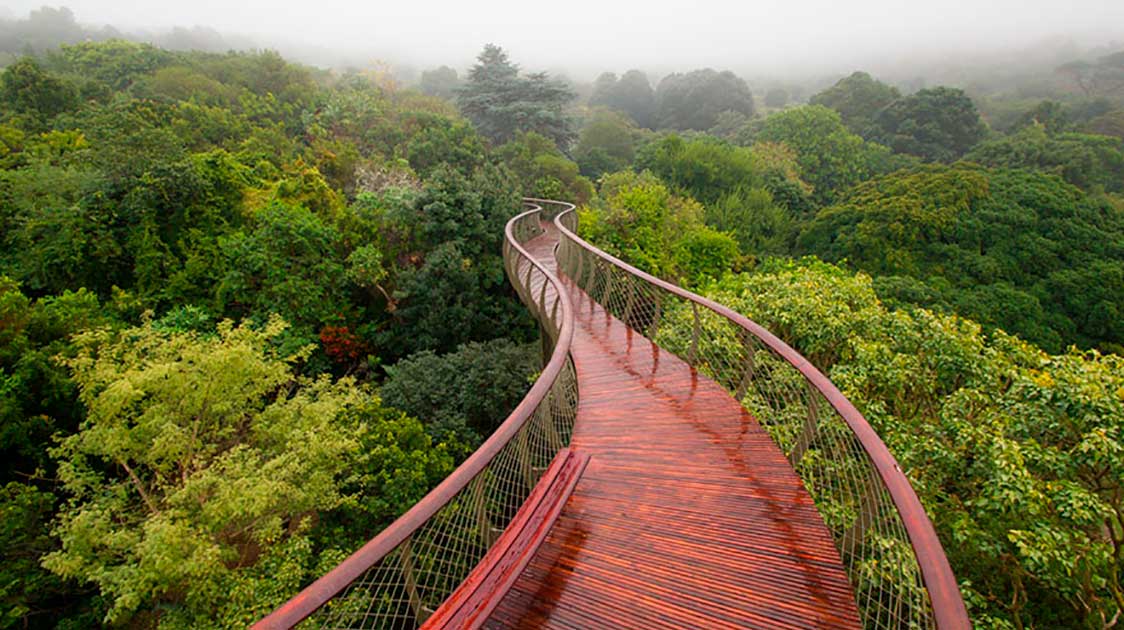 Tree canopy walkway built in South Africa[/caption]
Your dream was to be an astronaut but you failed? Well, do not despair! There is still a way for you to watch the world from above. In fact, there is a “strange snake” in South Africa that will bring you to the top of the world, or pretty close.

No strange rituals or magic tricks, “the snake” we are taking about is the Centenary Tree canopy Walkway that was built in the South African botanical garden of Kirstenbosch for its 100th anniversary. This raised walkaway is informally called “The Boomslang”, a venomous snake of the region, because its structure is inspired by a snake’s skeleton.

The bridge is 130 meters long and its construction took around 2 years, from 2013 to 2015, and cost nearly  $400,000 dollars, provided mainly by private donations. The project is the result of the collaboration between the architect Mark Thomas and the engineer Henry Fagan. They succeeded in the creation of a low-maintenance, low-impact structure perfectly integrated with the nature environment around. The bridge goes around the trees, and like a snake winds and dips its way through the botanic garden. Exactly like the reptile that inspired its form, it is discreet and almost invisible.

This new way to appreciate the forest will definitely leave you agape. This magnificent timber and steel bridge takes the visitor from the floor to the top, above the canopy. It goes up to 12 metres above the ground and touches the floor only in two occasions. The Boomslang represents a panoramic viewpoint to admire a really special place. In fact, Kirstenbosch is part of the Cape Floristic Region, which was declared in 2004 a UNESCO World Heritage Site. Besides that, it is also the first botanic garden in the world to be devoted to a country’s indigenous fauna. Last but not least, the walkway is open to the garden visitors without any additional fee and it is wheelchair accessible.

If you were still wondering about your next vacation destination, maybe you just found it. What better way to spend a day than in nature, walking amongst the trees?