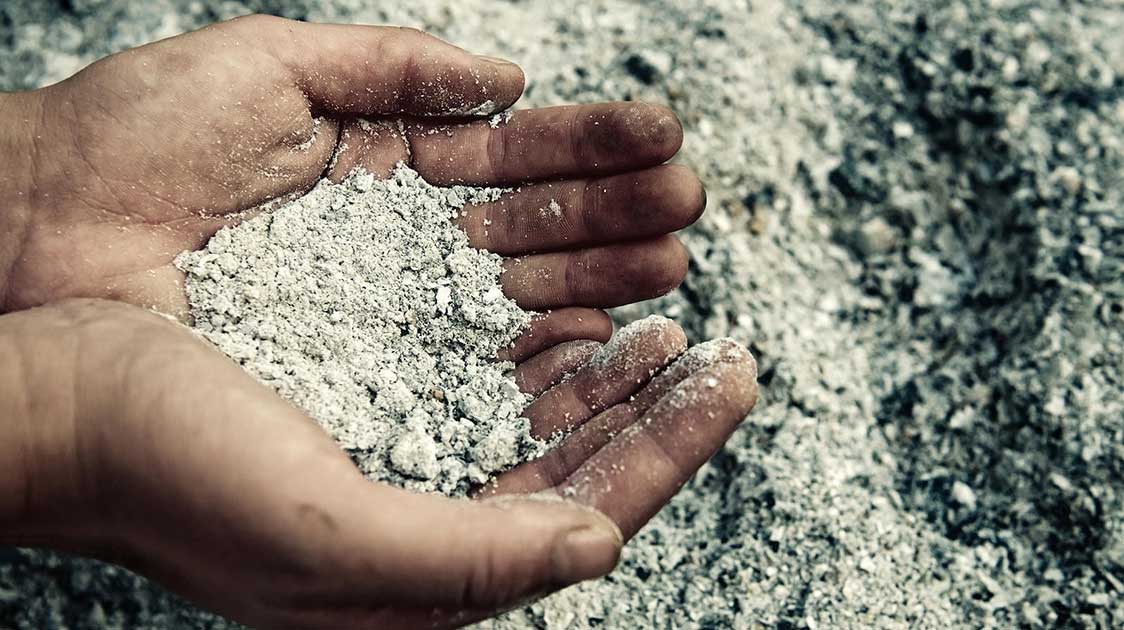 Human cremation is a process that is over 17,000 years old. How incredible is that!

It has been used with more or less intensity depending on the historical period and culture of each region. In fact it has been a bit of a rollercoaster.

In the last 30 years, human cremation has become the most widely used system in practically the whole world with respect to inhumation (corpse burial) due to its lower cost and lower environmental impact.

How did we get here? In this post, we go back in time to understand the fascinating origins of human cremation.

The Origins Of Human Cremation

Cremation dates from at least 17,000 years ago in the archaeological record, with the Mungo Lady, the remains of a partly cremated body found at Lake Mungo, Australia.

After that, the first known cremations took place in the area of ​​the Mediterranean coast in the Neolithic era, but it declined during the establishment of the Semitic culture around the third millennium BC. C. Human cremation was widely observed as a barbaric practice in the Ancient Middle East, even in times of plague corpses were piled up and buried in mass graves. The Babylonians, according to Herodotus, embalmed their dead and the Zoroastrian Persians punished anyone who attempted cremation with punishment.

In Europe, the first traces of human cremations date back to the beginning of the Bronze Age (2000 years BC). The custom became dominant throughout that time with the Urnfield culture (1300 BC). In the Iron Age, inhumation became again more common, but cremation persisted in Villanova culture and elsewhere according to descriptions in the literature.

The earliest human cremations may have been connected to ideas of immolation with fire, such as Taranis, god of Celtic paganism.

Hinduism is notable for not only allowing it but prescribing it. Human cremation in India is already attested in the Cemetery H culture (1900 BC), considered to be the formative stage of Vedic civilization.

Human cremation remained common but not universal, in both ancient Greece and ancient Rome. According to Cicero, in Rome, inhumation was considered the more archaic rite.

Christianity condemned cremation influenced by its roots in Judaism, and in an attempt to abolish Greco-Roman pagan rituals. Towards the 5th century AD. C., the practice of human cremation pretty much had disappeared from Europe. 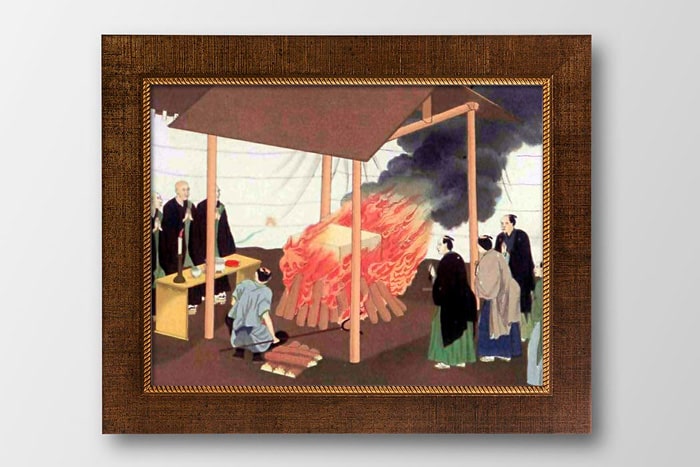 In parts of Europe, the origins of human cremation were impacted after it was forbidden by law, and even punishable by death if combined with Heathen rites.

Cremation was sometimes used by Catholic authorities as part of punishment for accused heretics, which included burning at the stake. For example, the body of John Wycliff was exhumed years after his death and burned to ashes, with the ashes thrown in a river, explicitly as a posthumous punishment for his denial of the Roman Catholic doctrine of transubstantiation.

Retributive cremation (based on living actions) continued in modern times. For example, after World War II, the bodies of 12 men convicted of crimes against humanity at the Nuremberg Trials were not returned to their families, but cremated, and deposited in a secret location, as a specific part of a legal process aimed at denying the use of said location as any kind of memorial.

In Japan, however, a memorial construction of the executed war criminals, who were also cremated, was allowed to be erected to hold their remains. 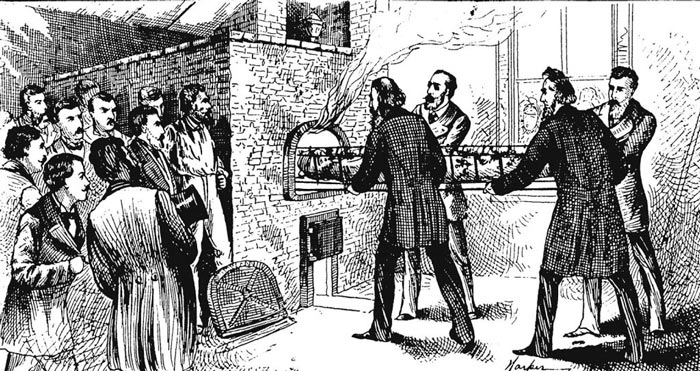 Powered by hygienists, the modern cremation movement began in 1873, with the presentation of a cremation chamber made by Padua professor Brunetti at an exhibition in Vienna.

In Britain, the movement had the support of Queen Victoria’s surgeon, Sir Henry Thompson, who together with his colleagues founded the Cremation Society of England in 1874.

The first crematorium in the United States was built in 1874 by Julius LeMoyne in Pennsylvania.

The first crematoriums in Europe were built in 1878 in Germany and in England.

During World War II they were used to proudly incinerate veterans (however, the bodies of the opposing side were burned in “Bonfires” both to express their contempt for them as to clear ground).

Cremation was declared legal in England and Wales when Dr. William Price was prosecuted for cremating his son. The formal legislation then followed with the authorization of the Cremation Act of 1902 which involved procedural requirements before a cremation could occur and restrict its practice to authorized places. Some Protestant churches began to accept cremation around this time.

In 1963 Pope Paul VI lifted the cremation ban, and in 1966 allowed Catholic priests the opportunity to officiate at cremation ceremonies.

In 2020, due to the Great Pandemic, incineration was an effective alternative to try to efficiently manage the quantity of deaths linked to coronavirus COVID19. Also, instead of using wooden coffins, cardboard was used in some places, such as in New York. The great benefits of human cremation

The chemicals used during the inhumation burial process contain pollutants that seriously harm the environment. In contrast, current cremation ovens are designed to burn natural or propane gas, optimizing consumption to a minimum. The gases emitted are filtered by systems that prevent the emission of most of the polluting particles into the environment.

The Bios Urn ® ​​offers the possibility of combining the ashes of human cremation with the earth in a natural and sustainable way.

Did you find it interesting to read about the origins of human cremation? It´s impressive how long it has been around and how it evolved over time. We would love to hear from you in the Comments section below!

The Amazing Cultural Practice Of Planting Trees In Trees, Symbolizing Life And Death