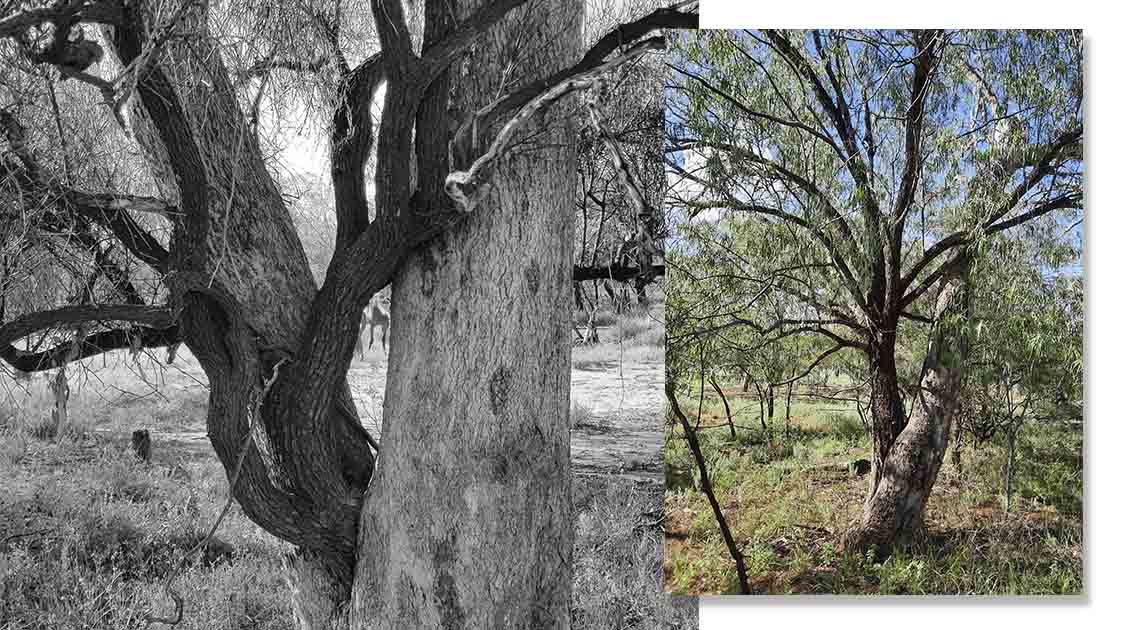 A cultural practice of growing trees in trees came to light and it is believed that it is an old Aboriginal custom where one tree was planted in another tree.

There are still many unknowns, but it is thought that the traditional owners are the Gamilaraay, also rendered Kamilaroi, Kamillaroi and other variations, which are an Aboriginal Australian people whose lands extend from New South Wales to southern Queensland. They form one of the four largest Indigenous nations in Australia.

At Bios Urn ® we had the great pleasure of speaking with Jane Pye who is a farmer from this area. She spends many days in the paddocks mustering sheep and many of the big trees are like old friends to her. She spends hours photographing and geotagging trees which bear signs of Aboriginal occupation. Jane often spends her time “tree hunting” with her friend, Kamilaroi Elder Allan Tighe who is of Aboriginal descent. 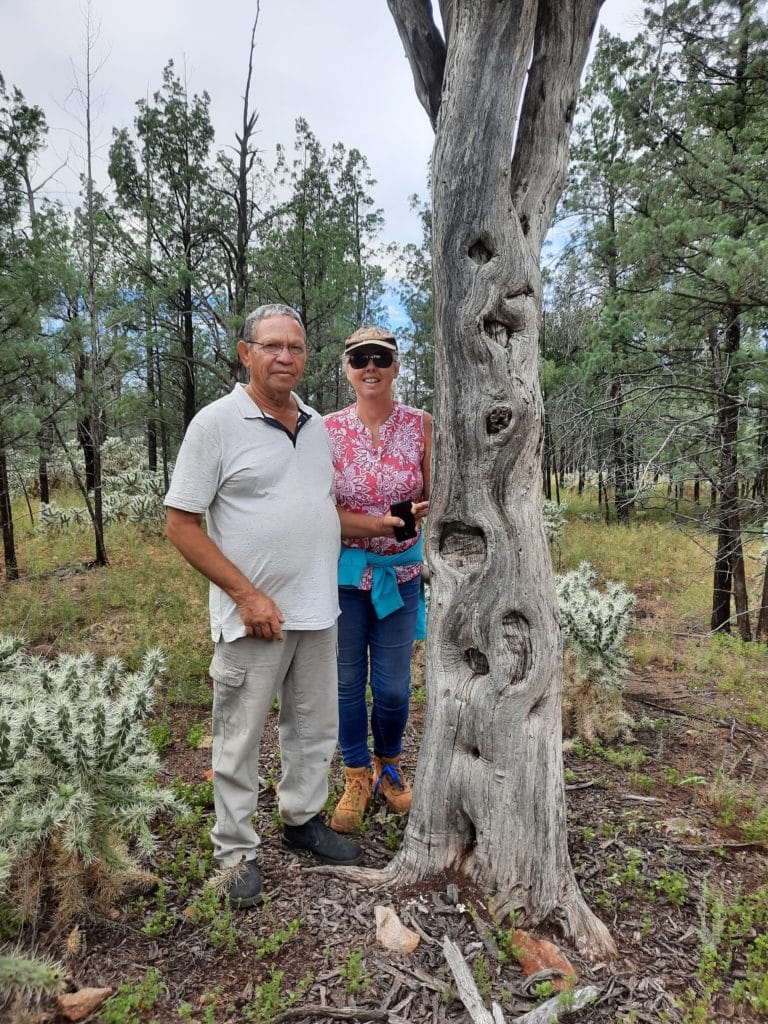 Why this cultural practice is so fascinating

They are an important link to Australia‘s Aboriginal past and a reflection on how innovative and resilient these people were. These trees in trees bear testament to the thousands of years of Aboriginal occupation and farming of this region.

Jane explains that surviving out there with it‘s unpredictable climate of harsh droughts and random floods is still tough today, but these people managed their environment and thrived.

There are reportedly over 150 of these “trees in trees” in this region. Images: scartrees.com.au

The symbolism of death

Jane explains that after years of trying to find out why the Aboriginal people there planted trees in trees, she coincidentally found out the day before speaking to Bios Urn that this custom marked the death of someone, quite the coincidence!

Her Aboriginal friend Allan was told by some of the elderly generation that when someone important was born, they planted a tree. And then when that person died, they planted a new tree in the dead part of an older tree (often eucalyptus trees as they hollow out over time). It is unclear if the second tree was a seed, seedling or cutting. The climate there is hot and dry so they would have to have watered it for it to thrive.

“It sure beats taking flowers to a grave!” Jane exclaims.

The cultural practice of growing trees in trees seems to be limited to this clan of Kamilaroi and the Wailwun across the river. They could be elsewhere in Australia, but Jane thinks people would have noticed by now and the descendants would be aware of it. So far it has not come to light (2021).

Jane has also photographed and geotagged the famous scar trees after years of admiring and speculating about them. It would seem that aboriginal people caused scars on trees by removing bark for various purposes. This is also known as CMTs (culturally modified trees).

Aboriginal people removed bark and wood from a variety of trees which were used to make canoes, containers and shields and to build temporary shelters. They also cut toe holds in trees to make them easier to climb.  This allowed them to use trees as lookouts, hunt for possums or bee hives, and cut bark higher up in the tree. The scarring of a tree is also thought to be for ceremonial reasons such as to bury a person inside the tree. People were buried inside hollow trees there – sometimes wrapped in a bark shroud or a burial wrap. 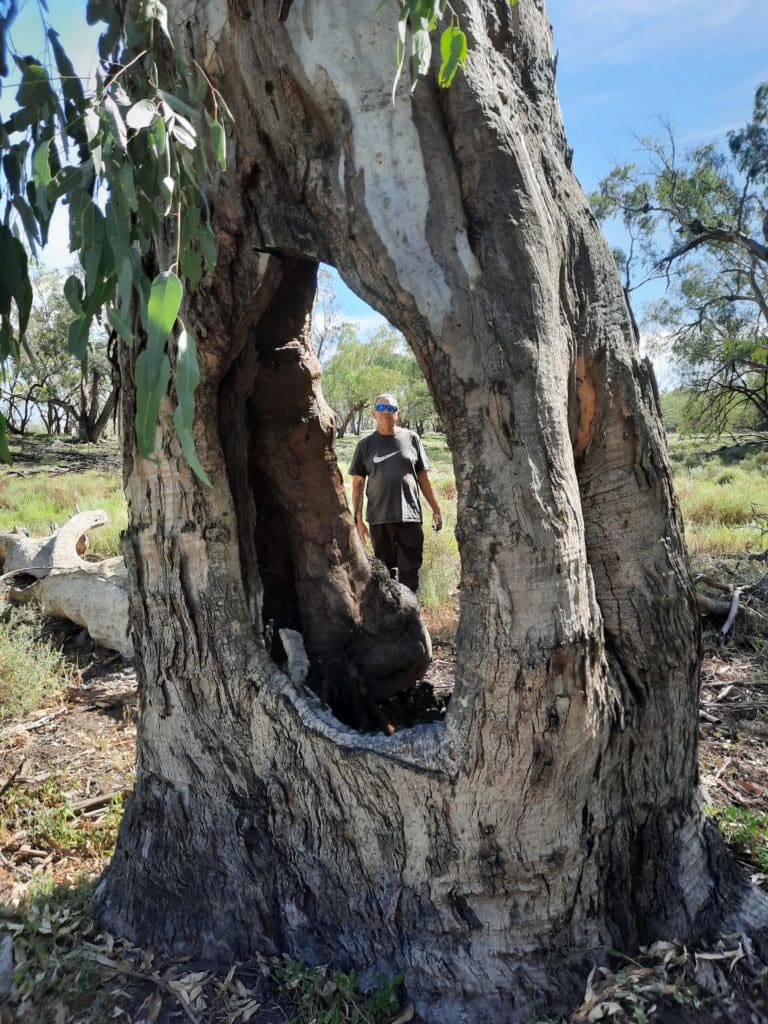 People were buried inside hollow trees there – sometimes wrapped in a bark shroud or a burial wrap. Image:
scartrees.com.au

The scars, which vary in size, expose the sapwood on the trunk or branch of a tree. Scarred trees are found all over Victoria (Australia), wherever there are mature native trees, especially box and red gum. People who may spot one are asked to notify local authorities to help preserve Aboriginal cultural places.

When a tree is struck by an axe (originally made of stone) the damage leaves an area of exposed sapwood which dries out and dies. This is called a “ dry face “ and the bark won’t grow back but the tree tries to seal the wound with new tissue called “overgrowth “. This growth is faster along the sides. The top and bottom of the scar and the dry face then appears elongated. Due to dieback and the uneven healing process these scars often look nothing like the original wound.

“I love these trees” Jane passionately says.  “They make me curious and they fill me with a kind of bliss that is sort of spiritual I suppose… a kind of belonging city people might get at a concert or sporting match but the ‘crowd’ I feel gathered around these trees have been dead for generations. I don’t have the words for this as I am a farmer not a poet.”

Those words sure sound poetic to us! Thank you Jane.

What do you think of this Aboriginal practice of planting trees in trees to mark someone’s birth and death? We would love to hear from you in the Comments section below!