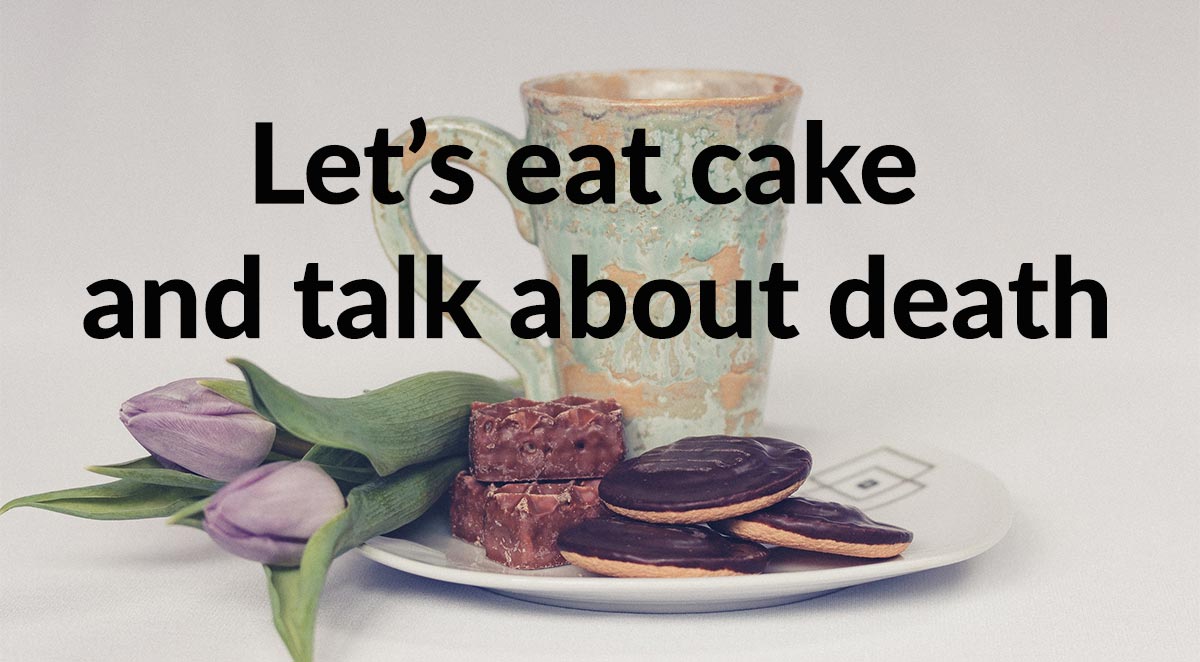 Recently we wrote a post about the fascinating profession and lives of Death Doulas, individuals who have devoted their lives to helping people transition during their time of death. Following this article, we discovered the ever so interesting “Death Cafe.” A “Death Cafe” is essentially a talk hosted by an individual in any city, state, and country in which people get together in a group and talk about death, and life.

The goal is for the visitors of a “Death Café” to be inspired and to live their lives to the fullest with an increased awareness of death. “Death is as important as birth, and it is so little considered. Especially in our culture, the topic of dying, death and farewell is still a taboo topic.”

What is “Death Cafe”, and how did it Start?

Death Cafe has a simple mission in mind: to sit down with people in a relaxed setting,  and talk about death over a cup of tea and a slice of cake. The first Death Cafe was started in 2001 in the U.K, by Jon Underwood and his mother Susan Reid. Following the success of the first Cafe, more followed and were held in a variety of places, such as people’s houses, cemeteries, and festival halls. At the time that her and son Jon started the first Death Cafe, they had no idea what form it would come to take and treated it as a casual meeting where people could discuss an important topic, that’s generally shied away from. We spoke with Susan, and something interesting that she iterated was that prior to the first Death Cafe there was no official forum where death and dying were so freely and readily discussed. “There has been a taboo around this discussion with people thinking that talking about death will make it happen for them more quickly.”

Karen Van Dyke was the first to host the Death Cafe in San Diego and saw a real need for it. “I work in the aging industry. I help families find places for their loved ones when they can’t or don’t want to stay at home any longer. What I kept finding is that families are ill prepared for this time in life. After being in business for about two years and consistently facing this issue (no conversations, no plans whether financial or legal, etc.) that I thought I need to create a workshop and teach people.”

As of now, there are over 52 countries which have held Death Cafe’s, which is quite amazing to think about!

There’s no telling where a conversation may lead

Each Death Cafe is unique in that there is no set agenda, and the conversations tend to take on a life of their own – each one varies so much because of the attenders involved, and the thoughts and stories brought to the table.

“Death Cafe’s are modeled after Cafe Mortels which were coffeeshop conversations,” says Lizzy Miles, host of the Death Cafe in Columbus, Ohio. The concept itself is simple of course – tea, cake and conversation about death. Over the past years, the guidelines have been adjusted to create a bit more structure in how the Death Cafe is hosted and a general outline of facilitating the conversations. “Every death cafe should be unstructured in the content of the conversations.”

Susan reiterated the point that each Death Cafe is very different, and topics can take on a humorous tone, while others can be a bit macabre. Some conversations she remembers broached topics of euthanasia, religion, and customs around death. “There is often laughter,” Susan says of the Death Cafe’s, which is probably something not many would expect – but there is a certain humor which can be found.

The intention is to provide a safe space for conversation, without ideology, religion, or any kind of agendas being involved. The format slightly varies but generally people will be put into small groups of four or five and will discuss a topic amongst themselves, before returning to the larger group for an ending discussion. “People have different ideas, backgrounds and some have strong opinions on how death should or should not be done. It doesn’t matter…bring the conversation and let’s discuss,” says Karen, host of the Death Cafe in San Diego, California.

Can talking about death help us?

Death is a scary topic, and one that is often ignored or not discussed. Perhaps gathering in groups and talking about it openly, in a lighthearted manner can prove to be beneficial and open up a dialogue around a long considered taboo subject. What if by thinking about death we can learn to lead more fulfilling lives? Talking about death and thinking about it can help prepare us for the future, and can also teach us not to sweat the small stuff in life. It can also help us lead intentional lives, in which we have the power to choose what we want out of it. We believe in the power of choice. While thinking and talking about death can be healthy, it has to be respected that not everyone may be open to it.

As the first person to bring the Death Cafe to the U.S, and out of the original setting, Lizzy Miles felt connected to the project and thought it would benefit others as well. “The Death Cafe events are helpful for people who have a desire to talk about death and dying or their own mortality. The expansion of death cafe events around the world tells us that not everyone is avoiding the conversation. That being said, some people will never want to talk about death and that’s okay too…we have to be respectful of those who have a different approach to life.”

The key to take away from all of this, is that you don’t have to focus or worry to much about death – but perhaps have a healthy balance by figuring out how to make the most of your life.

“The goal is to create a relationship with death so that living life fully is more achievable,” says Karen. She hopes that initiatives and groups like the Death Cafe can take the topic out of the closet and help people lead more fulfilling lives.

At the very least, thinking about the topic can also help us prepare and plan.

Karen shared some of her conversation starters that she has used while hosting in San Diego.

How do you get involved or host a Death Cafe?

It’s simple, just go on the Death Cafe website and look up events around you. If you don’t find one near you, you can set up to host your own. The key to hosting your own is following the guidelines, picking a date, finding a venue for the cafe, and registering it on the website. Lizzy stresses that this process is simple, and doesn’t have to be overcomplicated.

Karen recommends going at least once. Since we are all going to die, “attending a Death Cafe at least once is a really good investment of your time! And did I mention you might make some new friends and even laugh! It doesn’t have to be morbid. Really.”

We recently learned that Jon Underwood, the founder and creator of the first ever Death Cafe recently passed away. We would like to thank him in this post for the work he has done, and the impact his work continues to make worldwide.

What are your thoughts on venues like the Death Cafe? Do you think it’s important to discuss? What questions would you add as a conversation starter?