What is a Wishing Tree?

Trees serve as spiritual teachers of sorts, and both humans and wildlife are attracted to them for the refuge they provide. An interesting thing to consider is how cultures across the world form various traditions related to nature. Take for instance, a wishing tree. A wishing tree is essentially an individual tree which has been chosen specifically, and is used for offerings and wishes. These trees are identified as having a special traditional, spiritual, or cultural significance. Generally, people will come to these trees and make offerings (in the form or notes, flower, coins, and more) to have a wish granted, or a prayer heard.

These trees have become known in various parts of the world, and some even have festivals which revolve around them.

Interesting Wishing Trees in The World

In Japan, there is a very big festival known as Tanabata. At its core, this festival and tradition is focused on the concept of love and lovers on the earth plane. Generally people celebrate Tanabata by writing wishes on small pieces of paper, and hanging them on bamboo trees, sometimes with accompanying decorations or offerings. The use of trees came in during the Edo period, during which the tradition of hanging them on bamboo trees appeared. The act of placing ones deepest wishes and hopes on a tree branch is more than just a beautiful activity, it is metaphorical. Bamboo is believed to have been adopted because of its tendency to grow straight and tall, with allowing the wishes to travel to heaven. Bamboo has also long signified a bountiful harvest in Japan and other parts of the world. 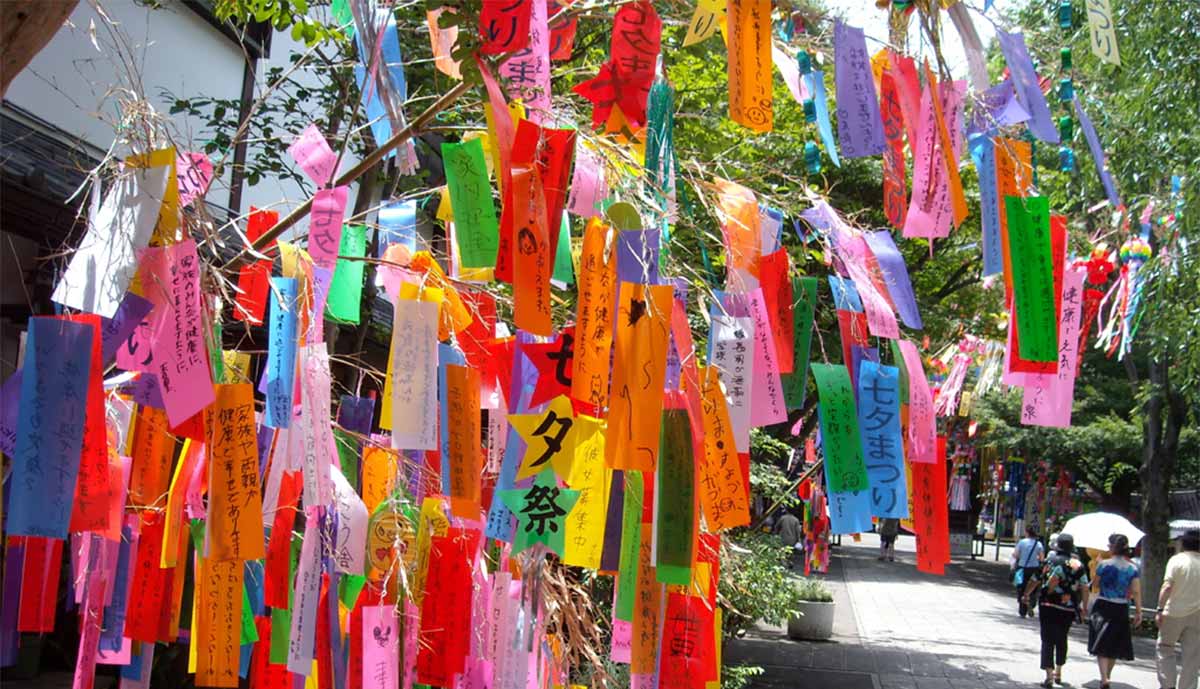 In the UK, instead of people leaving notes, they leave coins. Strange as it sounds, coins have been hammered into old trees all over UK woodlands. The trees used are generally old or already felled trees, and according to some this strange tradition dates back as far as the 1700s. It’s believed that divine spirits dwell in these trees and that if a sick person pressed a coin into the tree, their illness would go away. It’s also been said that it brings fortune. 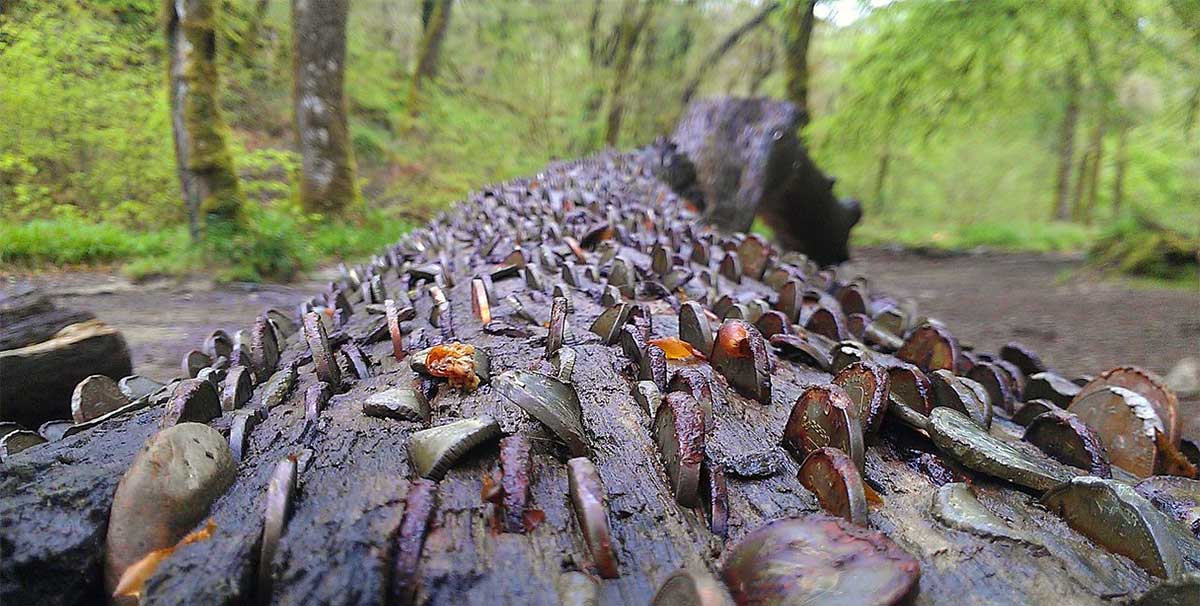 In Scotland the practice of tying cloths to trees, is known as “clootie wells.” The cloths were soaked in a nearby well, and then hung on the trees as offerings.

Yoko Ono started an art project based on the idea of tree offerings and wish tree. Her project is simple and beautiful: install a native tree in a different location, and have individuals fill it with wishes until its branches are full. The project started in 1981, and has been instituted in New York City, St. Louis, Washington D.C, San Francisco, Pasadena, Palo Alto, Tokyo, Venice, Paris, Dublin, London, England, Finland, and Buenos Aires, Argentina.

The wishes wrote on Yoko Ono’s art project are honest, truthful, and human. One stated “I wish everyone was as happy as I am right now, ” while another “I wish I could find another job so that I can feed my family.” 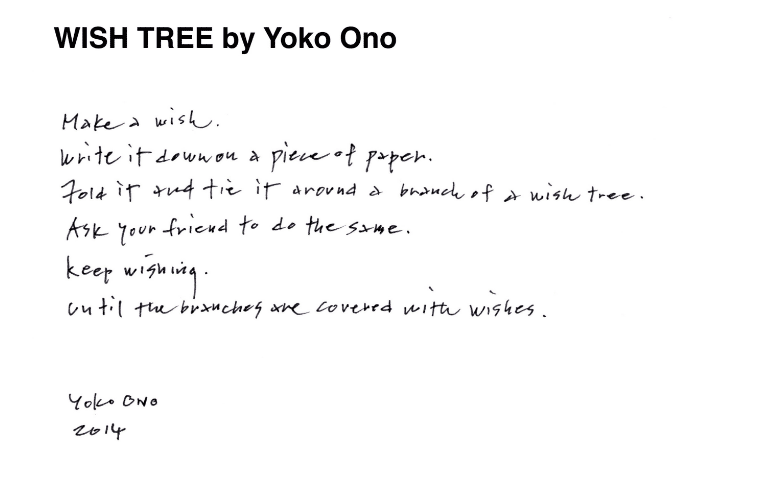 Make a wish. Write it down on a piece of paper. Fold it and tie it around a branch of a Wish Tree. Ask your friends to do the same. Keep wishing. Until the branches are covered with wishes. 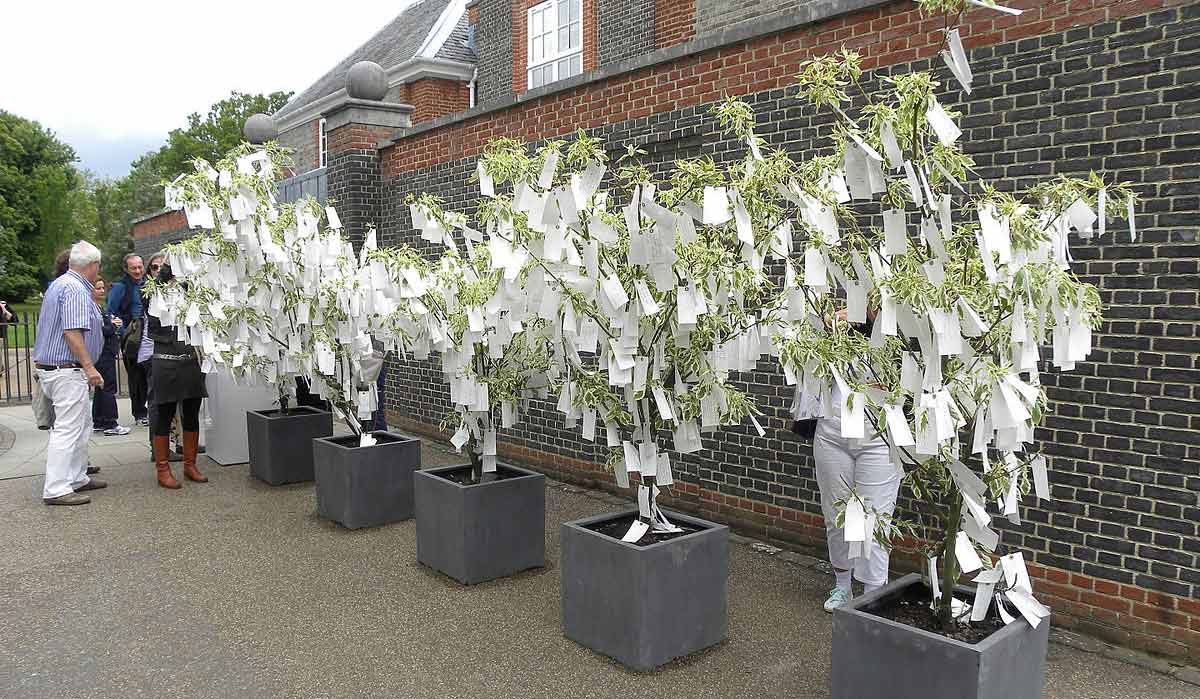 For Native Americans, the trees were honored as a way of upholding their sacredness. “Native Americans would come from all over to pay respects to a ponderosa pine tree. They would hang things from its branches – ribbon, meat, tobacco, coins – it looked like a Christmas tree, in some ways. This idea of honouring the tree is common around the world. The more people honour something, the more sacred it becomes.” – Source, The Telegraph UK

Why We Worship Trees

Why do we make wishes or say prayers to trees? Because they are nature’s deities. Trees are natural sanctuaries and since man has inhabited this earth, they have been appreciated and looked up to as a divine source of inspiration and beauty.

“Many cultures thought trees were antennae for divine energies. If you look at the culture of Ireland, they had the Brehon law of the forest, and had all these rules about how to treat it. The forest was a sacred place.” Though it sounds almost hippyish, “there have been studies of Sitka spruce trees in Scotland that suggest they bear traces of exploding supernovae in their trunks. There is a persistent idea in mythology all over the world that trees are related to the heavens. It looks as though early societies might have been on to something.”

To early societies, trees were a source of food, fuel and shelter. Aside from the odd pyramid or cathedral, trees were also taller than nearly every man-made structure until the mid-19th century. As living organisms on a much longer timescale than humans, they are obvious focal points for spirituality.” – Source, The Telegraph UK

It is no wonder why aside from wishing trees, we feel a pull towards the Bios Urn®. The tree is an eternal symbol of life, of strength, of wisdom, and of longevity. Above all, it knows how to adapt to this world, and survive – all the while making everything near it flourish.

Perhaps it’s time we create our own wishing trees, whether with a Bios Urn®, or a tree in our backyard.