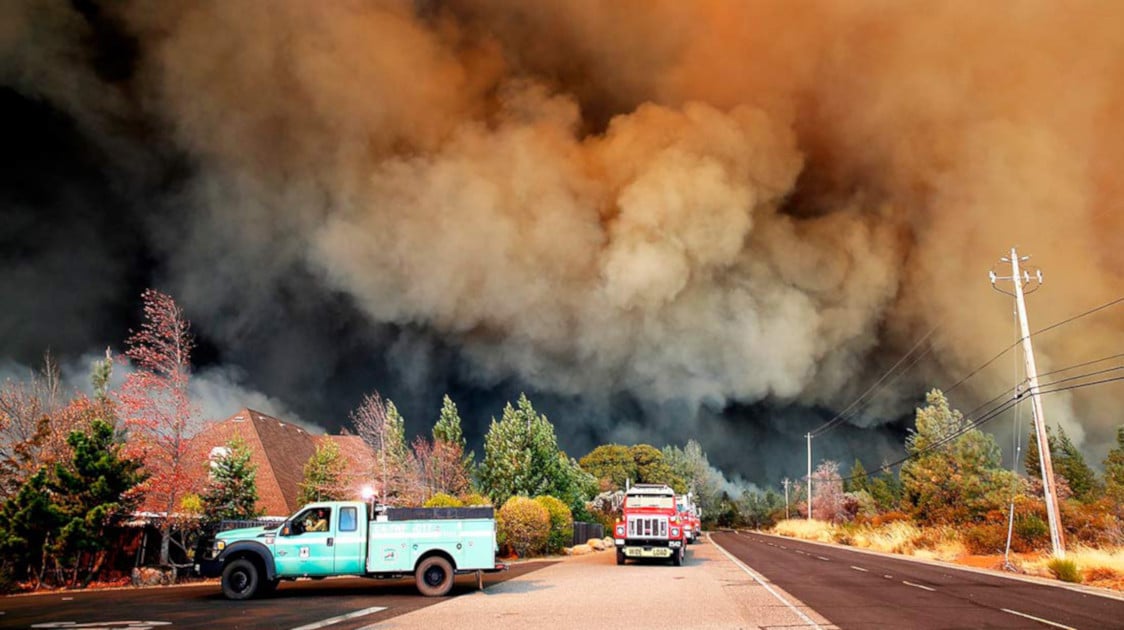 On a daily basis at Bios Urn, we come across stories which not only touch our hearts, but also touch our souls. And this sure is one of them. Wherever you live in the world, you must of heard about the deadly California wildfires that occurred in 2018. The 2018 California wildfires season is the deadliest and most destructive wildfire season on record in California, with a total of 8,527 fires burning an area of 1,893,913 acres, the largest amount of burned acreage recorded in a fire season, according to the California Department of Forestry and Fire Protection.

In mid-July to August 2018, a series of large wildfires declared as a national disaster erupted across California, mostly in the northern part of the state, including the destructive Paradise fires. They took 98 civilian lives and 6 firefighters were killed during the rescue mission, not to mention the billions of dollars of damages, the devastating loss of wildlife and forests.

Marybeth lived in Paradise and shared her heart-wrenching story with Bios Urn about how these California wildfires destroyed her home.

Marybeth´s story in her own words

If you ever doubted that life was fragile, try this experiment. Take a good look around your home or apartment, your neighborhood and your town. Look carefully at everything you own and love. Now, close your eyes and count to ten. Open your eyes and imagine everything your just looked at and admired to be gone for good….all of it gone! It is devastating to imagine, but even more devastating to experience for real.

Marybeth´s home before the wildfires

My life as a 69 year old widowed woman was almost perfect until the early morning of Thursday, November 8th, 2018. There I was in my perfect 1400 sq. ft. home with my four rescue dogs eating my breakfast in front of the TV watching the news. All this was happening in my very friendly neighborhood in my perfectly lovely little mountain town of Paradise, California.

Thankfully, Thursday was the day of the week when my trusty handyman, Randall, was scheduled to work at my house. Just then, a banner came across the bottom of the TV screen which read, “10 acre vegetation fire in Pulga,” That news was not too alarming because living around Paradise exposes you to lots of small vegetation fires that our County Fire Resource, CalFire, usually handles with little or any trouble. More troubling to me were the Red Flag Warnings for high winds that the weather forecasters had been broadcasting all week due to the California wildfires. I picked up my cell phone to find out where the vegetation fire had started. I did not know where the town of Pulga was located. The map app on my phone indicated that Pulga was about 26 miles due East of Paradise. I thought to myself, “26 miles. That’s pretty far away. I’ll get Randall to help me prep for a possible evacuation later in the day. But for now, I thought everything should be just fine.”

Just as that thought crossed my mind, Randall came running into my house screaming, “We’ve got to get out here right away or we are all going to die!” I told him to gather the dogs, their bowls, a bag of their food and a case of water bottles and put them into the trunk of my 2011 Ford Fusion in the garage. As Randall ran around the house getting the dogs situated, I began grabbing a few pieces of clothing, my meds and a hanging garment bag of clothing I had purchased to attend my daughter’s wedding in San Francisco exactly one week from the day of the fire. I got all of that into the trunk and started looking for other important things to take with me. 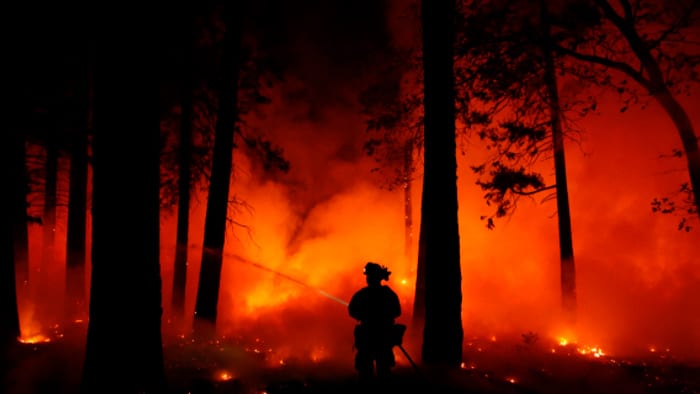 The California wildfires had taken over Paradise too

The sky all around the house began turning orange and it began raining down black ash. One other thing I grabbed as I scrambled around the house was my “GO BOX.” This box was a large plastic tote that I had assembled over the past year after I was evacuated from Paradise for just a few hours during the Honey Fire. The tote was filled with all my important legal, medical and personal paperwork. It also contained the Bios Urn I had purchased for myself two years earlier. I had selected a Bios Urn with a Sugar Maple tree seed in it. I selected a Sugar Maple tree seed because I had spent most of my life growing up on the East Coast. In the Northeast, Sugar Maple trees are highly prized for their beauty, their colors and their luscious Maple Syrup. I wanted my legacy to be represented by a tree that added beauty and good food to the world.

I put my “GO BOX” on the floor in the garage waiting to be loaded into the trunk of my car waiting for me get in and drive out as part of the wildfire evacuation. As Randall was running around helping me and my animals for get ready to leave, a young couple who had just moved in across the street with their young toddler came running over to see what was going on. That couple seemed to be completely unaware of the impending danger in Paradise caused by the California wildfires. Randall explained to them what was going on and they ran home to get started on their own evacuation measures. 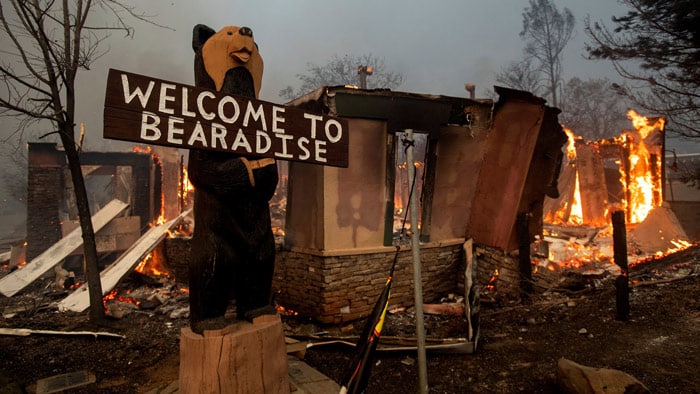 Randall and I immediately left my house in separate vehicles and joined the bumper-to-bumper evacuation process that appeared to exist all across the town of Paradise. Randall drove back to his own house in the lower part of Paradise while I headed straight down the Skyway to try and reach the town of Chico. I drove for almost an hour through sky high flames with hot embers and ash showering down on my car. Ash was blowing through all of my car’s air vents. My eyes began to burn and as the sky turned from orange to gray to black, it was nearly impossible to see any of the cars surrounding me or to even see anything in the road except for an occasional strip on white down the center of the road. My car got as hot as a sauna and the windows began to vibrate as if the were on the verge of shattering. Needless to say, my dogs were terrified and shedding like crazy.

After about 45 minutes, the traffic began to break up a little allowing the drivers to go about 25 miles per hour. When I finally got to Chico, I pulled over in the Chico Mall parking lot to get some water for myself and for the dogs. When I opened the trunk to get the water, I noticed that my precious “GO BOX” was nowhere in sight! It appeared that it had never been loaded into the trunk of the car. So now the realization hit me that I was not only potentially losing my home, my neighborhood and possible a big part of my town, but all of my legal, medical and personal papers. It was only then that I realized my Bios Urn had been lost too.

The California wildfires even took my Bios Urn

I originally made the decision to purchase a Bios Urn for my own burial because in the previous 15 years of my life, I had overseen the long term illnesses and eventual deaths of my father, my mother and my husband. After enduring three traditional burials, I knew that I wanted to find a more sensible, affordable and sustainable means of natural interment for myself. In addition, I did not want my adult children to have to grapple with all of the burial decisions that I had to make for the recently deceased members of my family. 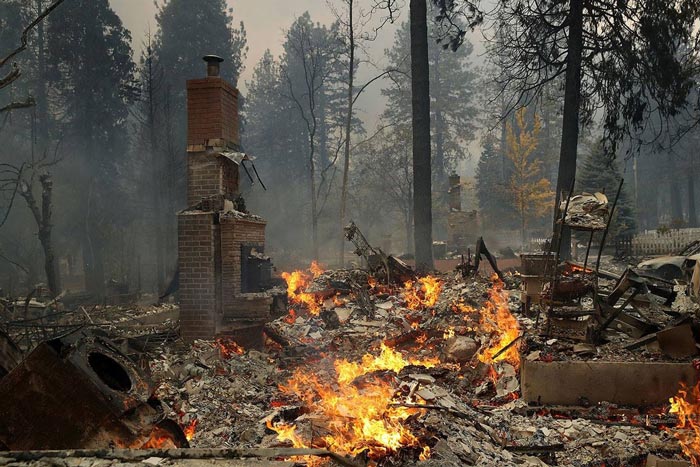 One day while surfing the Internet, I came across information about Bios Urns. I immediately embraced the concept and the product and I knew it was just what I was looking for. After doing a little more research, I ordered a Bios Urn with a Sugar Maple tree seed inside. I shared my ideas about my burial with my two adult children and I introduced them to the Bios Urn and where I kept it so that they could find it in case anything happened to me.

While living in California for the past ten years, I came to admire the Coastal Redwood tree. I became particularly interested in them because they are generally live long lives and because they are so magnificently tall and impressive. I also learned that we have lost more than 90% of our Coastal Redwoods due to climate change and over development of our lands.

So, when the Bios Urn folks ran a promotion online asking people to share their stories about Bios Urns or their feelings about the Bios Urn product and its use. I submitted my story, but did not win the promotion. My story, however, did catch the attention of the press desk at Bios Urns. They contacted me and asked me to write a testimonial about the Bios Urn that I lost in the California wildfires as it completely destroyed my house, everything I owned, all my important papers and my Bios Urn. They were so touched by my losses and the awful destruction caused by the California wildfires, the kind folks at Bios Urn offered to replace my lost urn with a new one. I accepted their offer, but told them that this time, I’d like an urn that contained a Coastal Redwood tree seed. I wanted my life and eventual death on the West Coast to be memorialized by having my burial site grow a Coastal Redwood tree. It is my hope that my Coastal Redwood tree will make a small, but important contribution to the rehabilitation of the Redwood forest population along the West Coast.

Shortly after I evacuated the California wildfires, my adult daughter asked my how I felt about the current state of my life. I told her that I felt like my life had turned into a 1000 piece jigsaw puzzle and that everyday I wake up trying to find even one small puzzle piece in my life that I can put back together to make the picture of my “new normal” life to come into better focus. Having friends and family help me out along the way is a great help. Having a Bios Urn back amongst my few valued possessions also adds to giving me more piece of mind about my future.

Each Bios Urn planting is unique

Each planting, each location, is specific to the individual and family, and no two Bios Urns in the world are the same. That´s the beauty of these stories, there is a sense of autonomy and choice. Dealing with loss is always hard, and tends to send life in an unknown and often confusing direction. One thing we believe at Bios Urn, is that people see the beauty of life expressed in nature, and in trees. How we connect with these cycles and these stages is personal into and of itself, but the important thing is that we all connect. Our only hope is to provide comfort and a positive alternative to those who have experienced loss, and to provide a voice for those willing to share their unique stories.