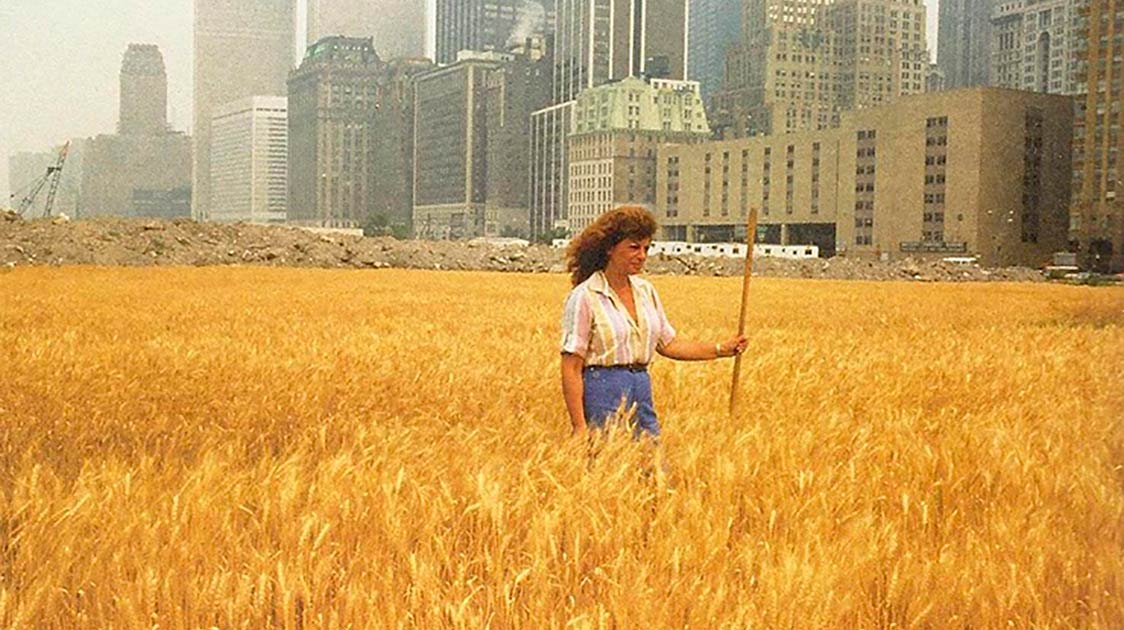 How does a city look like? Considering that half of the world population lives in urban centers, we will reasonably think at a city as an overcrowded and polluted space dominated by a grey sky.

However, if you look better around you, you may see a yellow wheatfield. At least this is what happened in New York City in 1982 and what is going to happen in the Italian city of Milan in the next months. This growth is due to the “magical power” of art. In fact, Wheatfield, a Confrontation is one of the best-known works of land art of the American based artist Agnes Denes. This woman is a primary figure among the concept-based artists who emerged in the 1960s and 1970s, and she had her works exhibited in some of the most prestigious museums of the world (i.e. Museum of Modern Art, Metropolitan Museum).

However, let’s go step by step. Land art is an art movement born in the 1960s in the US in which, as the word suggests, landscape and art are strictly connected. The landscape is somehow transformed and become the piece of art in itself. Often land art is done far away from urban spaces and the works are left to change under wheather conditions. However, Agnes Denes did a different choice.

She realized this work of art for the first time in 1982 in the area nowadays occupied by Battery Park in down town Manhattan. If you are familiar with this area, you know this means just a few blocks away from the financial center of the world, Wall Street.

Agnes Denes worked on the harvest for a six-month period (spring, summer and fall) in 1982. And now, 33 years after, she will replicate the original project in Milan. The Italian city is getting ready to host the next Universal Exposition where planet nourishment will be the central theme. Nothing better than this piece of art then to remind people the key role of nature in our survival. The wheat in fact is the base for two of the most important food in everyday diet: bread and pasta. With her work, Denes wanted to focus the attention on the importance of a sustainable social and economic growth.

The visual impact created by this work is astonishing. Just imagine a two acres field of golden wheat surrounded by some of the highest skyscrapers in the world. In Milan, as it happened in NYC, the wheat field will grow in an area surrounded by newly build skyscrapers and will occupy an area of 5 hectares (12 acres) near Porta Nuova. This piece of art is a celebration of the power of nature that takes back her own space, but also a warning to the viewer about upsetting the nature balance.

Wheatfield, a Confrontation is also an invitation to question ourselves on how we want the cities of the future to be. Here at Bios Urn® we would like our cities to be smarter and greener. The key word for our future days is greenification. What is yours?