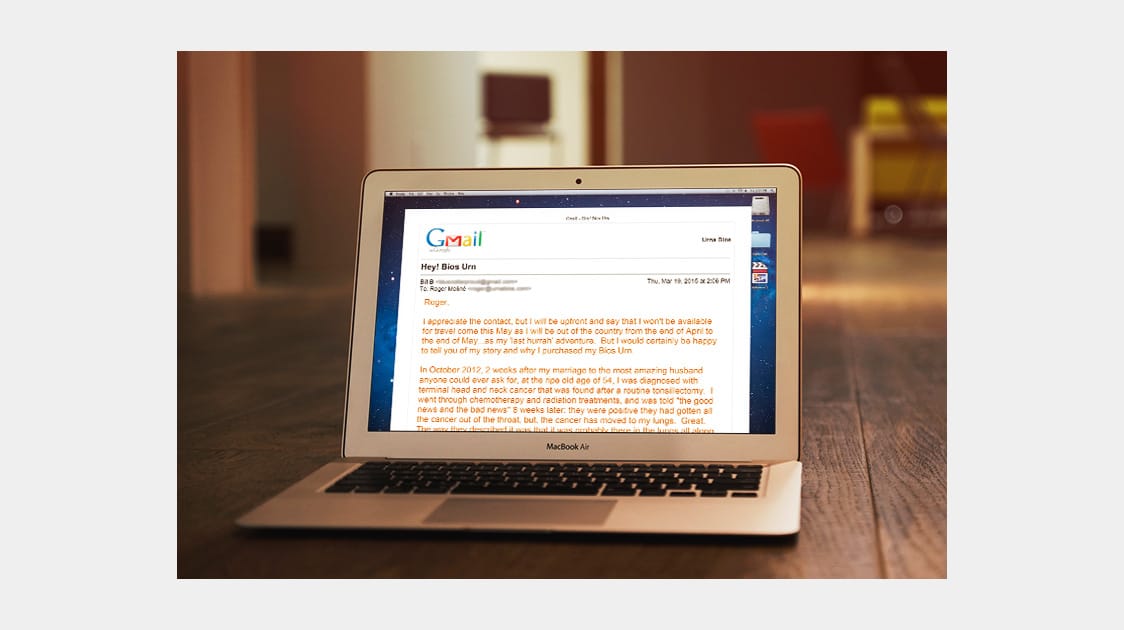 The Email that inspired us to do more.

Some days ago I received an email as a response to one of our feedback surveys from someone who bought a Bios Urn®. His name is Bil and he is living in the north of the United States.

When we emailed him we were just asking for a brief feedback about the Bios Urn®. Frankly, I wasn’t expecting such a meaningful story or the permission to share it. Our aim was just to get some advice on how to improve the Bios Urn® and our relation with people.

But life sometimes gives you things you don’t expect. And those are always the best ones; thanks Bil. His story became so inspiring that we decided to start a new adventure to share the thoughts from people who used Bios Urns® with the world.

With no doubt, they all deserve it.

I appreciate the contact, but I will be upfront and say that I won’t be available for travel come this May as I will be out of the country from the end of April to the end of May…as my ‘last hurrah’ adventure. But I would certainly be happy to tell you of my story and why I purchased my Bios Urn®.

In October 2012, 2 weeks after my marriage to the most amazing husband anyone could ever ask for, at the ripe old age of 54, I was diagnosed with terminal head and neck cancer that was found after a routine tonsillectomy. I went through chemotherapy and radiation treatments, and was told “the good news and the bad news” 8 weeks later: they were positive they had gotten all the cancer out of the throat, but, the cancer has moved to my lungs. Great. The way they described it was that it was probably there in the lungs all along, but so small it was undetectable. I remember my doctor saying “It’s like weeds in tall grass.” He gave me a life prediction of 7-12 months, of which I have superseded by over a year–and counting.

This type of cancer, called Squamous-cell Carcinoma, doesn’t behave like other cancers. “Remission” is not used for this kind of cancer as they doctors are always chasing it because of the ease in which it morphs and moves around the body. It travels via blood, nerve, lymph node system, or just by adjacency. They never know where it is going to end up next, so they automatically determine the patient as “Stage 4/terminal”. You may be able to stall it’s progression, but you can never make it go away.

I am currently in a chemotherapy treatment regimen that I am tolerating fairly well, and has, for now, stalled the advancement of the cancer. I feel so fortunate to be here, and in the relative good health that I am in, being able to work on house projects and gardening. I even go to the gym sometimes. To look at me, you would never know I was even sick, but I know the slippery-slope of the cancer is not that far away. To ease the burden of all the final arrangements, I have gone ahead and have gotten everything pre-planned and pre-paid, so there are no decisions that have to be made during a most stressful time.

Hence, your urn: I never liked the idea of our interment ritual in this country: getting embalmed, placed in an expensive box, wheeled out to be put on show like a prize-winning fish, and then lowered into a concrete box, forever sealed from nature, with some gaudy stone marker placed at your head that no one will ever come to visit. I just wanted to be returned to the earth, and become one with the energy of it. The closest option we had was a simple cremation and then have the ashes scattered someplace….but even that is starting to gain resistance as more and more restrictions are being put in place over that. Having spent my life as an artist and landscape architect, I always wanted to be just set in the ground, and have a tree planted on me–but that was illegal until just a few years ago when someone had the brilliant idea to create “natural cemeteries”.

I had looked into these “natural cemeteries” where the concrete vaults are not used and you are placed in a natural grave where the earth and you slowly meet again. Although they are becoming more popular (and there is even one here in the Portland area), unfortunately, they are still rather prohibitive on cost….and I don’t think they allow you the option to add something like a tree to their property.
I don’t remember how I came across the Bios Urn®–if it was from a friend’s post on Facebook or if it was a blurb on the television, but it peaked my interest immediately and I had to look it up.

It has all the elements that I want: cremation, and the ability to become one with Mother Nature. It was perfect. Not only were the tree seed choices some of my favorites, you had my absolute favorite, Ginkgo biloba. I find the Ginkgo to be very much like my own personality, free-formed, adaptable, uncommon, and because of it’s age (270 million yrs old) it is considered a ‘living fossil’, and to me, that is a direct connection to Mother Nature. I will admit, I have made plans to purchase a young field-grown Ginkgo tree from a nursery to use alongside the Bios Urn® and its seed, if not for any other reason that I want instant gratification. If I’m leaving this world, I’m leaving with a show.

I actually have an excitement about being able to use the urn, and to know that the minerals in my ashes will help this tree grow, and become part of the “circle of life”. I actually remain a living thing, just in a different form.

I have suggested the Bios Urn® to many friends, and they are all interested in it. They all like the concept, and the urn itself is beautiful in it’s simplicity.

May I make a suggestion? How about a smaller version for the pets in our lives. Instead of choosing tree seeds, maybe the seeds of a flowering or fruiting shrub or a hardy flowering perennial plant choice? I know many people that have the ashes of their companion pets sitting in tins on shelves. This could be a great option using the same concept, just scaled down to meet the needs of the small amount of ashes a pet creates. With the pet industry in this country alone being an over $50Billion industry, (we spend a LOT spoiling our pets) this would be an easy market to break into, be a unique, elegant product and at the same time, giving the grieving pet owner a beautiful option–the “visual” of their companion for years to come as opposed to being forgotten as a dust collector on a shelf.
I have a good friend that has 6 previous pets all sitting in various tins and wooden boxes on a shelf, and I suggested that he buy a Bios Urn®, empty all of those ashes into it, and go plant it out someplace. Let those poor animals become one again with the most important thing in their lives: running around in the grass on a sunny day. What makes a dog happier?

I have my Bios Urn® actually sitting in it’s box on a shelf in my laundry room where I see it at least once a week, and it gives me pause. On one hand, it’s the reminder that I’m not long for this world, a year at best at this point, but on the other, I know I’ll become a greater part of the energy of the world. There’s a soothing quality to that. My urn, seeds and tree will be placed at the family homestead, a home that has seen generations, and will see many more. So, I’ll never be far away from the people that I love and who love me.

So, that’s my story. Feel free to use it if you wish. I thank you for such an amazing product, one that resonates with me to my core.

PS: After receiving Bil’s e-mail we decided to visit some of the first people to use a Bios Urn®. This was the result.. This is for Bil.

Constance Flannery was also interviewed by CBS in San Francisco.